January 30, 2022
There are two threads to this story. First I was taken by Joel Jenkins post about how the corporate news media (and this includes the ABC) has become less diverse in terms of the background and social class of its workers (ie journalists and editors) leading to the creation of less authentic and less diverse public narratives, ones which tend to subscribe to the narrow range of life experience and class that represents not the masses but rather the few professionals who now drive the corporate news world.  This is not unlike what Chomsky described in his book, Manufacturing Consent. He was talking largely about print media at the time but the process and outcomes are to my mind similar. In both cases what we end up with is less diversity in points of view, and those remaining tends to coalesce around a normative centre. It also serves the purposes of excluding from reasonable debate and discussion, a range of so-called fringe issues or points of view either by starving such discussion
Post a Comment
Read more 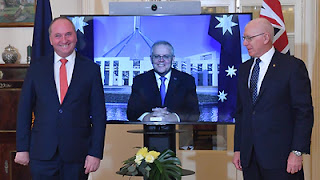 Is there an election coming? Fairly confident the answer is Barnaby, but that's leads inexorably to the "joke" if Barnaby is the answer then what the hell was the question?  Actually, I'm thinking that's exactly the "question" the answer of Barnaby speaks to. That is, why did the Nats want to dump McWhatHisName in favour of the bluster from the bush? For exactly the reasons that most city folk roll their eyes, Beetrooter is highly visible and disgustingly popular with the hardcore landed class who own and control large slabs of rural Australia. He speaks their language, old age right wing conservatism bloke heavy with naked corruption written large. He's so obviously a politician for sale and that's exactly what they like. And he will bring the redneck Qld electors with him, so he's a perfect tool in the not too secret election about to be announced, once the distracting spectacle of the gold standard in covid containment assumes it rightful
Post a Comment
Read more 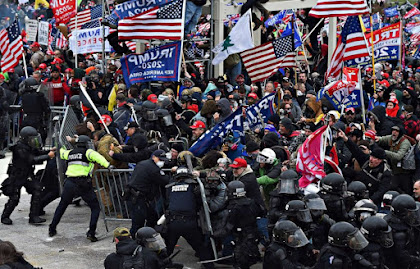 Roberto Schmidt/AFP via Getty Images The halls of power in the US Capitol are still reverberating with the aftershocks of the Jan 6 riot which has so far left 5 people dead. There is talk of impeaching Trump who only has a handful of days left in the job or getting VP Pence to invoke some arcane section of the US constitution but most likely the architect of the mob invasion will escape. What is perfectly obvious is Trump was clearly at work inciting his loyal followers to invade the place and probably weakening any potential police resistance thus allowing the invasion of the US legislative building. Consider this pie chart for a moment taken from the hill.com  "Fifty-nine percent of registered voters in the Jan. 6-7 poll did not support Trump's managing of the situation when his supporters broke into the Capitol building. By contrast, 41 percent of respondents did approve." 41% approve of the invasion! I'm sure if the invaders had been BLM protestors we wouldn&
Post a Comment
Read more

Two things happened today. I was surveyed by the ABS and I went for a walk. The two aren't usually related, but today they are. Part of the survey was about employment. The enforced physical distancing regime and related public health measures killed every single piece of work I had at the time. Yes I work in arts/entertainment. Fortunately one of my employers came through with JobKeeper so what was a total disaster became an enforced holiday, which as time goes by I am starting to see as just a prelude to the actual disaster coming in a few months time. But not everyone got a holiday. Some essential workers kept working, quite a few of them actually judging by the rather modest unemployment figures out today. One of #ScottyFromMarketing's favourites definitely kept their noses to the grindstone. They were recently rewarded via the renovation bonus, so hey keep up the good work fellas... I'm talking about these guys. Now there has been some coverage recently about
Post a Comment
Read more

Homeless in the lucky country

June 17, 2020
You know how rich Oztralia is. With a GDP per capita over $55k a year it's quite amazing that four years ago in 2016 there were 116,000 people officially homeless. That was before the Covid-19 depression we are currently in the midst of which is bound to increase homelessness along with unemployment. The Age ran a story a few months ago, again pre-coronavirus, which highlighted the devastating effect of homelessness on older women.  It's a state of affairs conveniently swept under the carpet. According to the Homelessness Australia website , the rate of homeless people is around 50 per 10,000. In the affluent burbs of Canberra that would mean over 1500 people are homeless. Predictably the rate amongst aboriginal and Torres Islanders is 10 times the average. This appalling state of affairs is but one consequence of a housing policy that encourages investment in housing as a means of wealth creation. Successive governments have pandered to the "housing market"
Post a Comment
Read more
May 13, 2020
I have renamed my blog. It's a small thing and no one reads it so really if a tree falls... At the outset I am giving credit to Guy Rundle at Crikey for the idea. So the land of magic pudding is that place where growth is unlimited and the potential for capitalism knows no bounds. It all happens by magic, all you need is magic thinking and presto, snap, you're there. Contrary to what some people say, I'm not a Marxist or a communist. I haven't formally studied Marx although I confess I did read a bit of Marx when I was a teenager and did hope to study Marx when I went to uni thirty years later. But no, while I admit some understanding and agreement with marxist philosophy I'm not a scholar of Marx. What I am is just a guy who thinks about the world too much. I try to make sense of it, build my own story as they say. In doing that I'm inclined to say most of the world makes no sense. Well and truly, the lunatics are running the asylum. Anyway this is th
Post a Comment
Read more

Imagine yourself as those kids

February 20, 2020
Van Badham on twitter wrote   "This is a really interesting way of phrasing “listened to the screams of the tiny, powerless children he had trapped in the car as they succumbed to the flames he himself had lit”. Imagine yourself as those kids, their last seconds of life in that car. Then reread the headline."   When I do that, I can only cry. It's an existential grief, haven't we all been children once?   I was. A child, terrified by a drunken lout who kicked in the front door of our public housing to abuse my mother and us kids while we were having a bath. It was the price you paid for being poor and fatherless. He didn't set fire but he could have. He was big, powerfully built and on another blinder. Somehow mum pacified him enough, we survived.   All around me, good dads took their boys to footy, rewarded their daughters with princess presents and generally played the role expected of them. Some of them were alcoholics like the succes
Post a Comment
Read more
More posts